Sometime in 2013, I restarted my dormant twitter account, treating it akin to a RSS reader, curating a mix of interesting people to follow and learn from. Some of these were writers, some politicians; others included philosophers, flaneurs and a few executives. Consistently I began to find that the most interesting tweets were from (Valley) VCs – Marc Andreessen, Benedict Evans, Paul Graham, Chris Sacca, Fred Wilson (NYC though) etc. Some of their tweets were no doubt about their portfolio companies, but a majority was instead on human-tech interaction, new technologies, the economy, culture and a zillion other interesting stuff.

And most of them didnt restrict themselves to tweets either. Many wrote interesting posts, and not just about their investing experiences. They were about the books they had read, ways to think about a new technology, how they saw a particular marketplace evolving, how to get startup ideas etc.

Through their tweets and their blog posts, I could see that they were trying to make sense of a fast-changing world, thinking through investment theses and tech’s impacts, and most importantly, developing a perspective as to how the future was evolving.

And it is not just the handful of VCs I mentioned above who tweet and write. They and a few other names make up a particularly influential subset of ur-tweeters and bloggers. But overall, many U.S. VCs, in the valley and outside, tweet and write to get their views and thoughts across. A detailed list of prominent U.S. VC bloggers is here.

Indian VCs do not write
In contrast when I look at Indian VCs, I find that there are no such thought trails on the internet. Most don’t tweet – and even when they do, many of these are retweets of other tweets, news about their portfolio companies. And fewer write, or have blogs. And even these are infrequent.

Rather than rely on anecdotes, I decided to create a list of ‘influential’ Indian VCs (whatever that may mean) and find out if they tweet / blog. I sourced these names via the following lists – one, two and three. Is this definitive? By all means no. But it is representative, and that should suffice for this post. 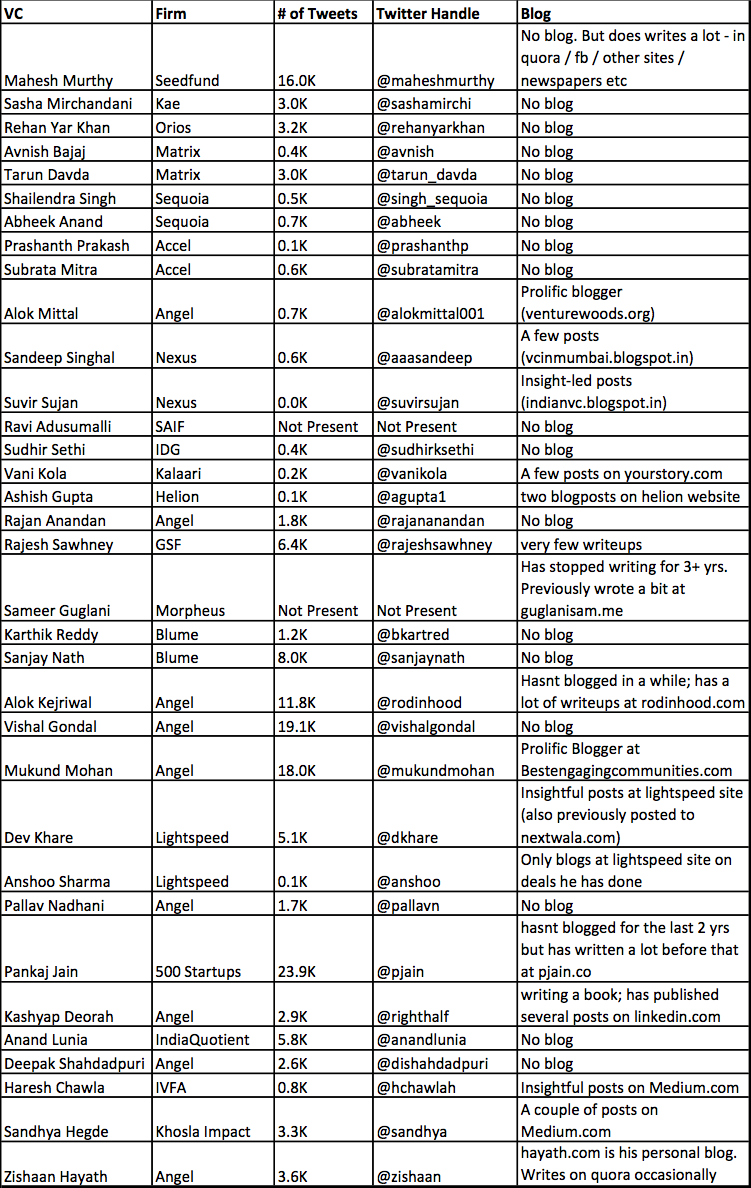 From the above, I drew the following conclusions

There are a few Indian VCs though who write in the U.S. mould. They are

The contrast between influential Indian VCs and their valley counterparts is stark. Compared to the insight-laced posts and tweets that you see from U.S. VCs, Indian VCs come off, and there is no point watering it down, rather poorly. Why is this so? Why don’t Indian VCs write?

Now it isn’t as if writing or tweeting is essential to success in investing. The U.S. VCs of yore didn’t tweet or blog. And many successful Indian VCs don’t write either, and it doesnt seem to have impacted their strike rate. Still I found the contrast fascinating enough to think through why this should arise. Here is what I think.

The supply-demand equation is in favour of Indian VCs
The most likely answer is that Indian VCs don’t need to write or can get away with it. The supply-demand equation is clearly in their favour, unlike the U.S. market, which is relatively more even in numbers between proven founders and top-rung VCs. In the U.S., VCs and founders compete among themselves to convince their counterparts. Blogposts and tweets become signalling that says – pick me, i am smart. In contrast, the Indian startup market is nascent and there aren’t too many proven founders (with successful past exits). Instead there are lots of first-time founders and a few VCs. Clearly VCs call the shots and hence the lack of incentives to market themselves, the way U.S. VCs need to.

The preeminent example of this U.S. VC trend is A16Z. Given where they started, A16Z needed to do something to differentiate themselves, as well as to position themselves. And one way to do that was to strive for thought-leadership through the content that they put out. Boy, have they succeeded.

The content from @a16z is getting so good that they may be defining a new model of sustainable, quality journalism: carry-funded.

From what I have heard, no other firm stresses as much on thought leadership as A16Z does. Whatever it is doing, it seems to be working. It is now in the upper echelon of VC firms in the U.S. in just a span of 7 years. Now, I am not attributing its rise to its publishing prowess. Clearly that is asinine. Rather its strong investing track record through hits such as Instagram, Skype, Oculus etc is the obvious explanation. But the publishing and the idea blitz makes it a sexy place for a founder to start with, thereby setting the virtuous circle of attracting good founders –> funding –> good exits –> attracting great founders, in motion.

On a side note, it is interesting to note that if you were to mask the logos & menu tabs on the home pages of A16Z and USV, they would look like home pages of media companies. 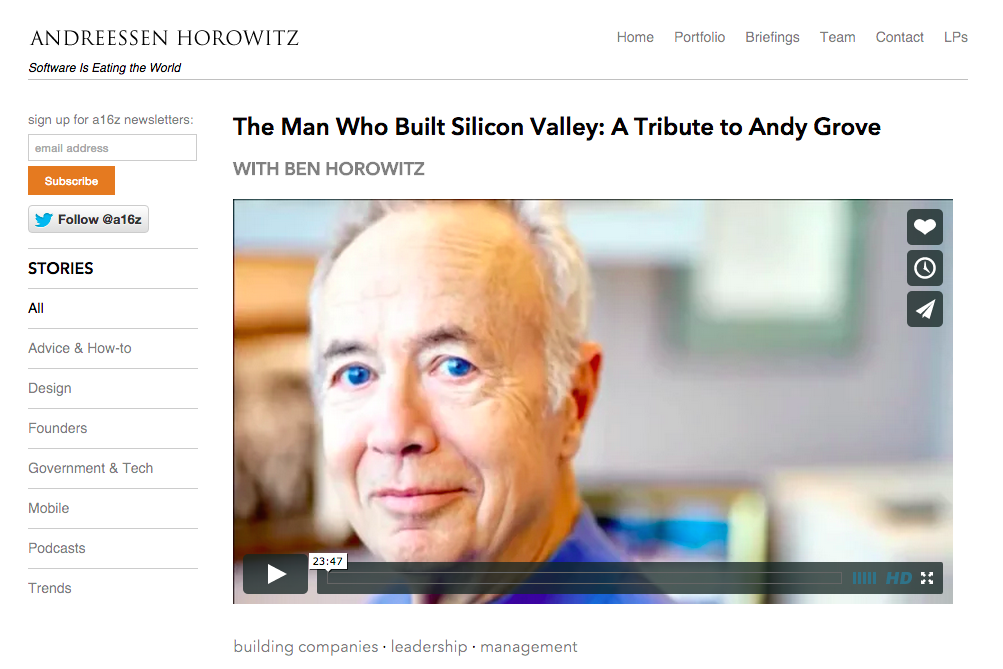 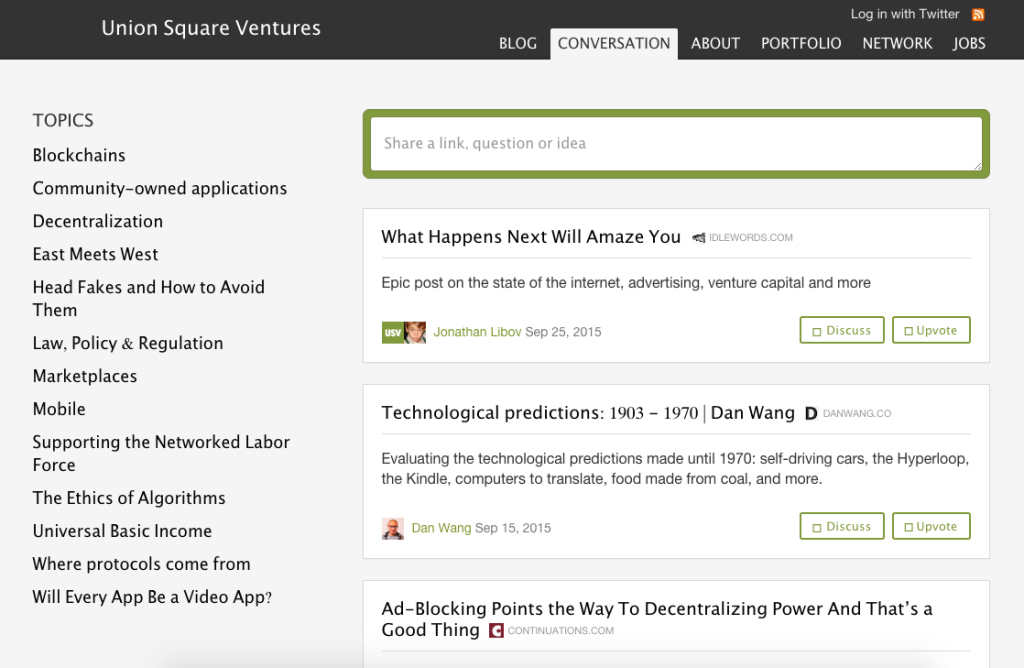 Indian VCs don’t need to develop original investment theses
An other likely explanation, one that is a little unkind to Indian VCs, emerges from the contrast between investing patterns, where in the West, VCs back original ideas, while in India VCs back proven ideas imported from the West.

If you are encountering an idea for the first time, then clearly you need to have an original, distinct perspective to evaluate this original idea. U.S. VCs build this perspective and create a world view by writing and thinking through disconnects, gaps and fissures in the marketplace. The consequent critiques and interactions emerging from the ecosystem help them refine their theses and hone this world view further.

In contrast in India, by looking at angellist and pitchbook, we can see which investing ideas are gaining traction. All that is required then is to pounce on the first decent-looking startup team that looks like it can execute an idea. Since Indian VCs can get by funding entrepreneurs mimicking U.S. ideas, there isn’t thus any pressure to develop any original investment theses of their own (yes, occasionally a zipdial sneaks through, but there are plenty of copy-pastes in the flipkarts and olas that litter the indian 100x list), and hence there is no incentive to generate and exchange ideas.

Indian VCs have no time to write
Indian VCs are really really busy. One Indian VC (not a franchise) I spoke to says “I do think Indian VCs work much harder too – folks like us are screwed on economics and work like dogs. The other guys may not work as hard but given infrastructure creaks, travel, attempts to do cross-border, fund raising cross-border, it’s an incredible number of chores!!!! Valley VCs don’t move their ass past SFO or vice versa most of the time – lots of time to give gyan. And good large partnerships that have evolved – v few folks relative to absolute strength of partners write even there…”

There is certainly a point here. This is also corroborated by a leading commentator / writer in this space I spoke to, who contrasted the incredible number of meetings a Indian VC does vs their U.S. counterpart.

I would hazard that the number of meetings an Indian VC does emerges in a way from reason #2 – pursuing derivative ideas. Typically a U.S. VC website clearly lays out the investment philosophy. This is developed through a great deal of discussion internally. To illustrate, in summer this year, I spent a month in the valley where I interacted extensively with the folks at GSV Capital. There Partners, Principals and Associates were writing a book that attempted to detail their approach to investments in education. Through this process, the entire team was trying to arrive at a common understanding of their investing thesis. I am sure that this process of debate and rewriting would have forced a very high level of clarity across the board on what kind of investments fit their thesis, and what won’t.

In contrast in India, I do not think there is such a refined investment thesis for most firms. There is a rush, and a frenzy to look at any and every idea, bereft of any sectoral focus. Perhaps this is the right approach for a market like India, which is presently going through a huge discontinuity. But this also means that there is no framework to evaluate and reject ideas. Hence an Indian VC has to meet each and every startup team and evaluate them, especially given that indian founders too do not have any original ideas; they copy what worked in the west and take them to VCs. Thus Indian VCs can only reject people, not ideas. Given that almost every potential investment proposition has to lead to a meeting certainly means that there is that much less time for thinking and writing.

Other explanations
There are a couple of other explanations which I came across that is worth highlighting. One is about the Indian (management) style vs the U.S. style. One VC I spoke to says “Indians typically talk less about themselves (I wouldn’t say all of it is ‘humility’ but we like to not talk and prefer being borderline vague about things). Besides, all VCs are very active on the events scene, that allows for enough exposure anyway and doesn’t necessitate blog writing.”

Another interesting explanation which I heard suggested that because a lot of the Indian VCs who play here are franchises of the U.S. firm (with carve outs for India), they are content to let their U.S. partners take the limelight, and not rock the boat too much. They weigh in on India specific ideas or trends, but are content to leave discussions on global-level ideas or trends to their U.S. partners.

Conclusions
Do I think this is a permanent state of affairs?

No, I don’t. At the end of the day, Indian VCs are as keen on deal flow as their Western counterparts. If writing a blogpost really mattered to enhance deal flow, they would do it. If they couldnt do it, I am sure they would hire a PR agency or internal marketing team to make it happen. The reason they don’t do it is because it really doesn’t matter, yet.

So when would it matter? Certainly as the supply-demand equation corrects in the future, we are likely to see more Indian VCs take to blogging and marketing themselves. The other trend which could give an impetus is the rise of original investing ideas, which necessitate discussion and debate, and hence will call for writing. Until then we will have to put with RTs and platitudes.