Indian advertising is badly in need of well-written books (or memoirs) by industry leaders, sharing their account of the evolution of the industry and sharing insights into advertising & marketing.

Pandeymonium, by Piyush Pandey, is not that book.

It will probably do ok in sales. Piyush Pandey is a well-known figure, possibly the best-known figure in Indian advertising, and there should be enough curiosity about the book to see it sell at least 5,000 copies, which I guess will make it a best-seller.

Still, it could have been better.

For one, Pandey is not playing in his native medium. He thinks hindi, and the book in English is just the wrong medium for him to play in. What would have been better is perhaps to have envisioned this as a podcast — where Pandey reminisces about his life and times over a 15-episode series in English / Hindi whatsoever. Imagine Piyush reciting his poetry or scripts in that rich voice of his in the podcasts (though one challenge with the podcast thought is that it cannot showcase ads or visuals).

Two, the book is largely a compilation of self-congratulatory accounts of his successes. To be fair to Pandey’s he does share credit with his younger colleagues. But as an elder statesman of the indsutry he misses an opportunity to look into industry dynamics, the future challenges (how digital is impacting etc) that the industry will face, how it will evolve etc.

Three, the book doesn’t seem very well-edited. Clearly the book has been written in an interrupted fashion, and possibly dictated by Pandey and transcribed by someone else. This accounts for errors such as 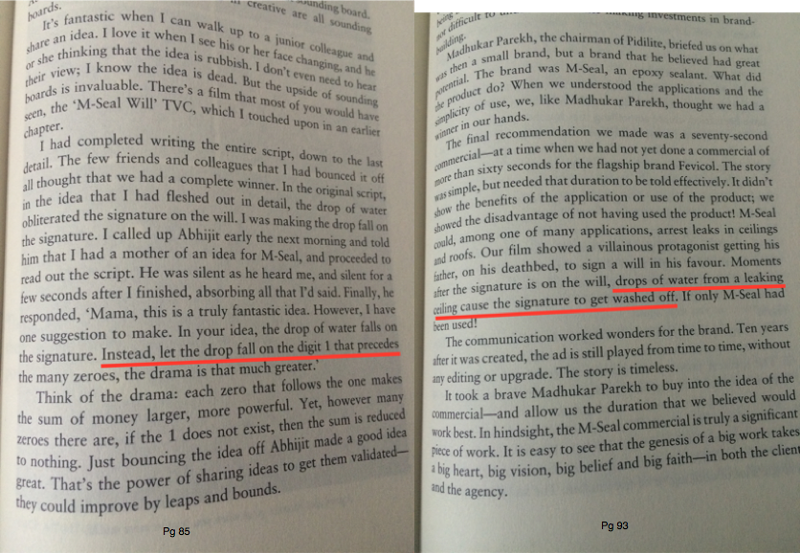 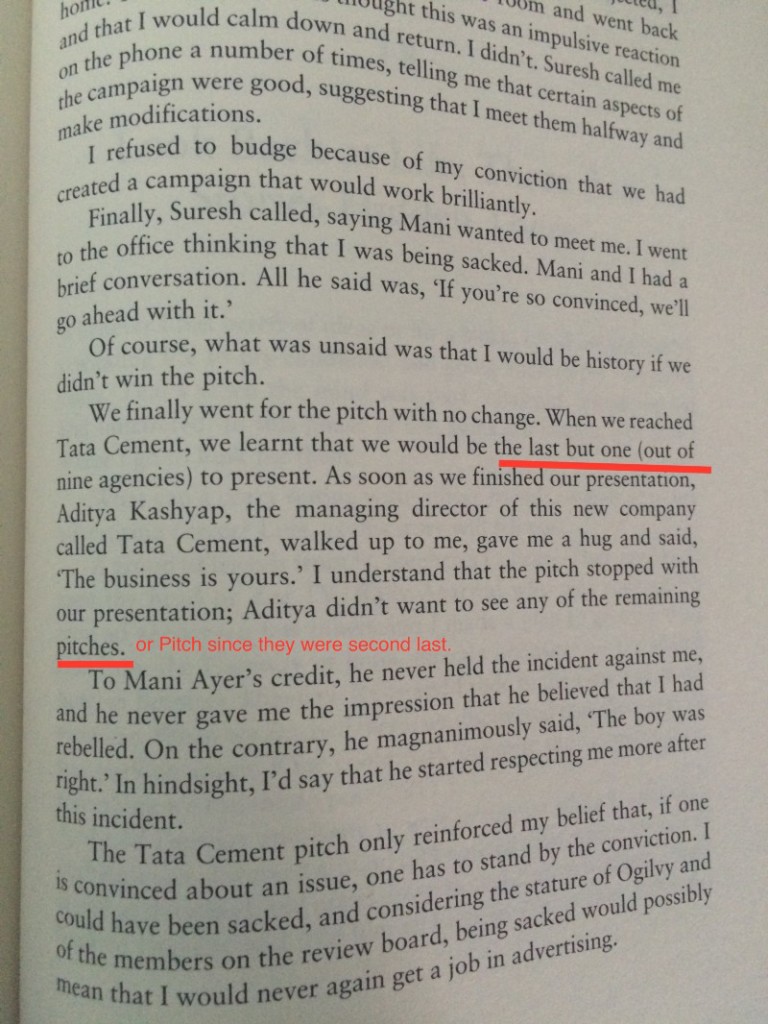 Reading these gives you an idea of what the book could have been — a behind the scenes look at what works and what doesn’t work in advertising, what makes for a great ad, how a great campaign is created from the insight to execution. There is a glimpse of this in pg 152, where he talks very very briefly about the outstanding Asian Paints campaign ‘Har Ghar Kuch Kehta Hai’. This is amongst the greatest ad campaigns in Indian advertising; the copy written by Piyush is pure literature. It deserves to be told in elaborate detail. But the entire creative process is wrapped up in a para. Wow! How did an editor or curator as he calls Anant Rangaswami let him do this?

This could have been Piyush’s masterpiece — a book that elaborates on the craft of advertising like his guru’s evergreen classic, David Ogilvy’s On Advertising, or one that could have been a distinctive account or commentary of his life and times in the rapidly evolving and exciting indian ad market, similar to Della Femina’s Pearl Harbour. Sadly, it is neither. We deserve better, and here is hoping Piyush Pandey will delight us in the future.