The signalling layer is decoupling from universities

The Wall Street Journal recently wrote about how graduates of less-known institutions find it hard to break through into Wall Street. This isn’t a new problem for lesser-known institutions. In fact this is one of the reasons why students compete hard to get into selective institutions such as Princeton or Williams, where there is a history of recruitment by big firms.

In the past, I have written about how selectivity of intake is a great signal to employers, and how companies coming to hire at institutions such as Harvard or IIMA are using the selectivity of intake at these places as a proxy for the potential of their hires. Sure, this could work for the Ivy League and other selective colleges. But what about colleges outside this list like NorthWestern or University of Florida. Certainly there are good students there. How could one select these students? What are the proxies or signals a recruiter can use at these colleges?

Let us actually flip that question around. How could a bright student in these lesser-known colleges signal to recruiters that I am on par with the best? Is there a signalling platform that he can tap into, distinct from that of the college? In fact, there are a few which I will talk about, presently in Finance and Engineering. And clearly there is a need for more, across different career tracks, and this presents an opportunity for startups and new ventures.

The best example of how signalling information has moved out from colleges into an external organization is Hackathons (NYT recently covered this). Students see participation in these hackathons — and keep in mind that some of the bigger hackathons such as TreeHack and MHacks are really tough to get into – as an opportunity to learn, network with peers, pitch themselves to recruiters; all three of which are precisely what a college exists to do!

Clearly if an external organization can help me get all that a college can give, then what stops a bright engineering student / hacker from joining a less prestigious college, or one that gives him a free ride, and build his credentials by participating in these hackathons?

The equivalent of Hackathons for Law Students would be international moot court competitions such as Jessup, and for MBA students (especially those pitching themselves to consulting cos) would be case study competitions (a well-known one is the John Molson Case Contest). However they are not as strong signalling systems as Hackathons. This has a lot to do with the nature of Programming. A lot of the learning part in coding is by doing / tinkering and credentials have much less value, whereas for law firms and consulting cos, your credentials have huge value and are also entry barriers (law).

Other example of signalling moving out of colleges include

We can visualize these in terms of a signalling layer or cloud, a term I borrow from technology, to indicate a layer outside of the traditional education stack where the signalling information resides. Increasingly as more and more platforms and players populate the signal cloud, colleges and universities will have to resign themselves to competing on other factors. 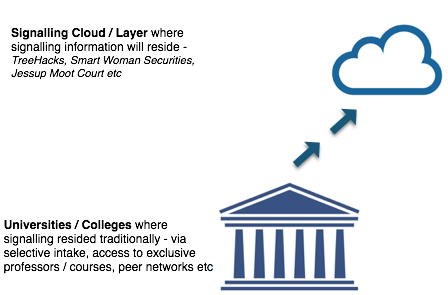 What could be examples of platforms or products that could emerge on the signalling layer? Typically I see these aimed at Tier 2 or 3 institutions, or for an even better moniker, non-selective colleges, say those which admit over 50% of the students who apply to them). Let me try and think out aloud a few ideas.

« My Higher Ed Newsletter» A Standoff at St Stephen’s