ln a previous blog post, I had written on the importance of the Sunday edition and how it now accounted for a disproportionate 40-50% of the weekly revenues of the average newspaper (For McClatchy, the figure is 36%).  This had, I postulated, been built largely on the back of the triple-whammy[1] impact of the FSIs (Free Standing Inserts) or Preprints – essentially inserts / supplements full of coupons that the consumer could redeem at the local supermarket / hypermarket.

In this post, I will dwell a little deeper into Preprints, and how they have become the 2nd biggest source of Newspaper Print advertising (after Retail) in US. I will also look into why Preprints are non-existent in India, and if anything can be done to create and grow this category.

Preprints or Free Standing Inserts (FSIs hereafter) are an advertising brochure or leaflet consisting of coupons for redemption at neighbourhood retail outlets. Preprints / FSIs are typically distributed through Sunday newspapers and increasingly now through direct mail as well.

What do they look like? Well, here is a picture. 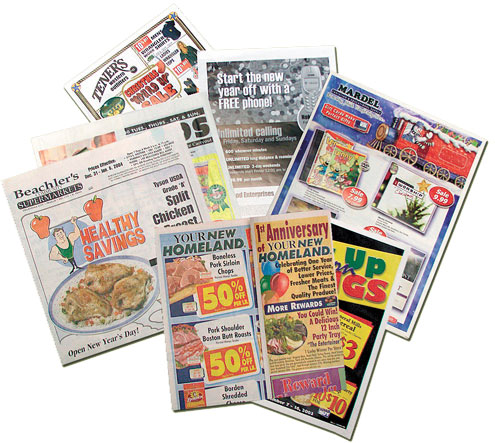 In 2011, it is estimated that as much as $5.2bn, that is over 20% of the $24bn advertising revenues generated by the US newspaper industry came through Preprints (source : Newspapers Association of America from Alan Mutter’s blog post Twin threats peril preprint newspaper ads). And in Q1 2012, Preprint’s share has increased to 26% of overall newspaper ad revenues (up from 17% in Q1 2007!).Preprint’s increasing share of newspaper advertising (In the same article Alan Mutter detailed how as much as 70% of the Sunday advertising was generated through Preprints!) is the result largely of a decline in Classifieds and other advertising categories. In absolute terms it is down by a third since ‘07. See the table below compiled from the Alan Mutter article.

However in comparison to the other categories, Preprint’s decline in absolute numbers will be the lowest. What accounts for the relatively higher resilience levels of Preprints?

For one, it works. A January 2011 white paper by Valassis, while not a neutral party given the stake they have in this space, stated that 57% of FSI coupons were redeemed by new or lapsed users, thus validating the claim that FSIs can bring in new users and thereby rewarding the brands who had advertised.

Secondly, the recession that set in late 2008 and the resultant pressure on incomes meant a search for frugality, as families seeking to make ends meet set off what is referred to as a couponing craze, including the launch of a TV show, and a multitude of couponing blogs.

The US Preprint market is also supported by the large presence of organized big-chain retail who have installed retail billing infrastructure that can track coupon usage and pass back data to marketers, thus providing feedback on what works and what needs to be changed.  In the absence of such a set-up, it would be arguable if the Preprint market would have evolved to such a level.

It is important to note that not all coupons or FSIs need to go through newspapers, though 87.7% do. Direct mail is another growing route, which has caused some recent controversy as well (detailed in Alan Mutter’s post and here)

Why haven’t Preprints taken off in India?

Now, this has been on my mind for a while. India is one of the few markets which is still seeing growth for newspapers (and it will likely stay that way for a while). It is also a market, which has seen several distinct innovations, from Private Treaties and invitation pricing to combo offers. So why have India’s aggressive growth-hungry publishers been hesitant to look at Preprints?

This takes on even more importance when we consider the fact that in USA, Preprints are chock-full of coupons from Fast-Moving Consumer Goods or FMCGs (as Consumer and Packaged Goods companies are referred to in India); In India, newspapers typically take in less than 2% of FMCG advertising, the bulk of it going to TV.

So with this context, one would have assumed that Preprints in India would be a done thing. Well, no.

A couple of reasons.

1)   Most FMCGs are seeing natural growth, either from increasing per capita consumption from urban markets, or increasing offtake from the rural markets due to increasing prosperity or better availability in these markets. Acquiring new consumers or encouraging trial, which is a key objective behind Couponing is happening automatically, so why would you want to invest in Couponing, especially when it is a nightmare to run?

2)   Unlike in USA and Europe most Indian grocery outlets are mom and pop outlets. Organized retail (multi-brand a la Walmart) has only recently been allowed in India. And in the absence of organized retail who have the ability to invest in billing technology that can track usage of coupons and send the data back to the FMCG firms, most firms that try out couponing will be flying blind. There just wouldn’t be any way to test the efficacy of the experiment. And even if they were to try it, without desiring to track coupon usage, I am told by my friends in FMCG that such coupon redemption offers are a nightmare to run, with a lot of manual toting up and checking. Hence the reluctance of FMCGs to go along.

It is likely that with the recent announcement permitting the likes of Walmart and Carrefour to set up stores (albeit with some restrictions such as a maximum of 51% equity and operations restricted to states which grant them permission) could catalyze the Preprint market. These big-box stores will have the backend infrastructure that will bring intelligence to the coupon redemption process, comforting FMCG firms that want to try this out.

All said, I do think the Preprint market is about 2-3 years away, given that that is the time it will take for the launch of organized retail and for FMCG growth rates to slow in urban areas, the two conditions that are I believe essential for the Preprint market to take off.

However, if newspapers wait too long, there is the threat of digital coupons – from the likes of snapdeal / timesdeal – which could bypass newspapers to access consumers. However given the strength newspapers have in India, and the fact that even in USA where newspapers are weakening, 87.7% of coupons still go through newspapers, I am confident that there will always be strengths for newspapers in the preprint / couponing category.

As I was getting to ready to publish the article, I came across Wanderful Media (previously ShopCo Holdings). Wanderful powers the coupon sections of newspaper websites in over 250 markets such as the Sacramento Bee, San Francisco Chronicle etc. Wanderful has been able to make this happen given that it has been founded by 12 newspaper companies including Hearst, EW Scripps, Cox Media, MediaNews, McClatchy, Washington Post etc. These 12 companies invested $22m in Wanderful to get it started. Wanderful aims to expand further with the launch of Find N Save tablet and mobile apps, with the intention of becoming the leading player in the space of ‘discovery shopping’. Wanderful seems to be a preemptive strike by newspapers to ensure that even if the $5bn preprint advertising segment migrates to digital, it will be to the newspapers’s digital brands.

[1] I defined the triple whammy impact as follows a) they bring in revenue themselves b) they help sell more copies due to the price-saving benefit they offer, and enable papers to charge more, thus generating higher circulation revenue, and finally c) the higher audiences on Sundays enable newspapers to charge more for regular display and classified ads on Sunday!

« The Battle of the Paywall Models, or Why the Metered Model won!» A Look at the Venture Investing Arms of Gannett, Advance and Hearst